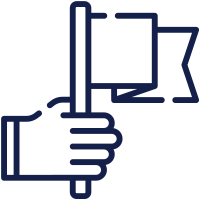 As Digiworld set its sights on continued business expansion, the company realised it needed more flexibility to increase its bandwidth and capacity on demand. Digiworld used a data centre on premises, which meant that any upgrade request was expensive and time-consuming. For instance, it would take six to eight weeks to fulfil a single request to add compute capacity.

Additionally, Digiworld felt that given its growth plans, it was important that the protection of its data scaled proportionally. Since it was using tape to back up its data, its staff had to manually perform these backups. “The process of getting new tapes and cataloguing them proved to be laborious, and it could easily take four hours to back up the data every day,” comments Nguyen Hoai Nam, ICT manager at Digiworld.

Established in 1997, Digiworld is a leading market expansion services (MES) provider in Vietnam, with a distribution network spanning 16,000 points of sale nationwide. As a MES provider, Digiworld helps organisations cut costs and reduce complexity as they enter new markets.

Recognised as one of the largest ICT distributors listed on the Ho Chi Minh City Stock Exchange, Digiworld serves as the authorised distributor for more than 30 international brands and plans to grow its network by up to 25% over 2 years. 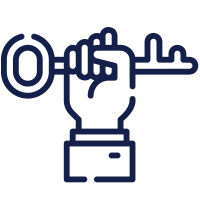 As Digiworld set its sights on continued business expansion, the company realised it needed more flexibility to increase its bandwidth and capacity on demand. Digiworld worked with Cloud Kinetics to best determine how to implement solutions from Amazon Web Services (AWS).

Digiworld decided to use Amazon Simple Storage Service (S3), which proved its low latency and value for money, compared to other cloud
providers. Cloud Kinetics also recommended Managed Backup Service with CloudBerry Lab, a Storage Technology Competency Partner in the
APN. These solutions gave Digiworld the option to balance availability and cost across AWS products based on their data storage needs.
Digiworld could now store, back up and recover data at any time, while taking advantage of the wide geographic presence of AWS.

“Digiworld was seeing double-digit revenue growth year-on-year. We needed to ensure we had resources quickly, to keep pace with our IT
demands and serve our customers and partners. With traditional hardware, we had to commit to a certain amount of data, hardware, and software upfront. We could not add resources at short notice. With AWS, we could get the resources we needed in a matter of minutes,”
says Digiworld CEO and Chairman, Doan Hong Viet.  Digiworld no longer had to contend with a six-to-eight week procurement cycle whenever it needed additional cloud compute and storage resources. With AWS, the entire process was reduced to a few minutes. In addition, its manual tape backup system was now automated, reducing the overnight process to a scheduled or on-demand task that now takes between four to five minutes. Digiworld estimates that in combination with other optimisations from its digitalisation efforts, it has reduced its IT team’s workload by 45-55 percent, allowing them to concentrate on other operating tasks that need their attention.

It turned to Cloud Kinetics, an Advanced Consulting Partner in the AWS Partner Network (APN), for a solution that did away with tape backup
and that could keep pace with its business growth. “We immediately recognised how Digiworld, experiencing a high level of growth, would
benefit from shifting to the cloud. Partnering with AWS, we worked together with Digiworld to help deploy AWS Cloud for durable storage
and protection,” says Peter Huynh, regional channel marketing director at Cloud Kinetics.

With the shift to the cloud, Digiworld can now explore new services and applications which its former IT infrastructure could not support.
“We had heard of the benefits of cloud but had not experienced them,” Nam comments. “Now we’re able to deploy other systems to the cloud
and can easily test new solutions. It has changed the way we approach IT operations.”

Previously, Digiworld would need to run a pilot with vendors on-premises and formally select one before it could see the benefits. “Now with the AWS and Cloud Kinetics as a partner, we can do a lot of our own proof of concepts before we formally engage with a vendor,”
Nam says. “And we can easily make changes if it doesn’t support our business objectives. That’s the benefit of our cloud-based strategy.”
Overall, the shift to AWS has meant that Digiworld can focus its efforts on delivering more business value to its customers, in line with its
business growth plans in the coming years. 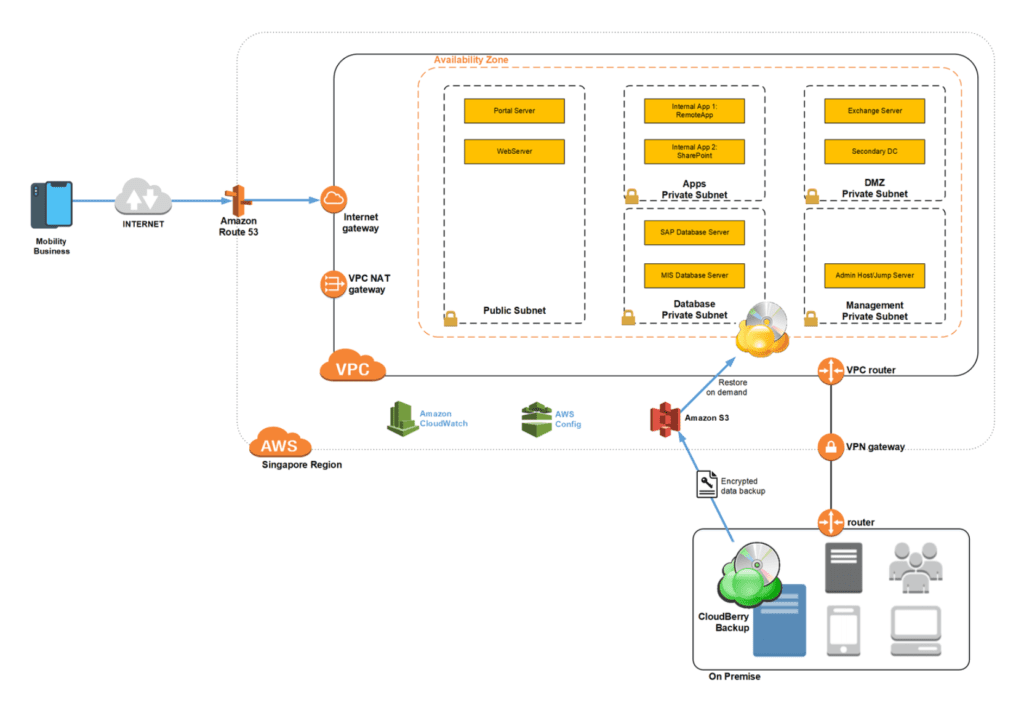 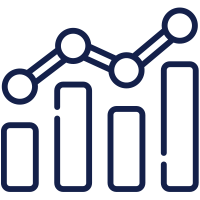 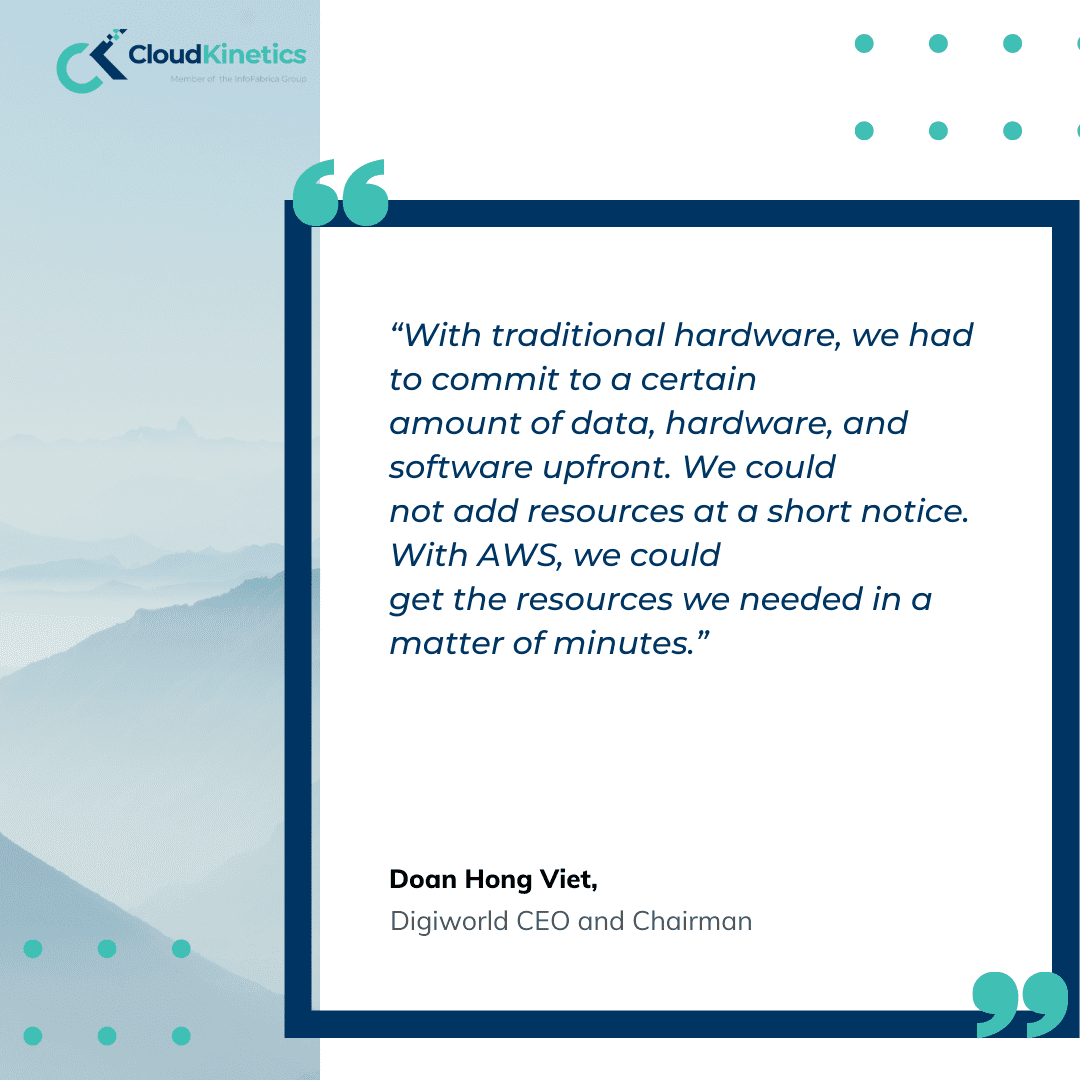